I recently decided to leave PayPal so that I could take a few months off and recharge.

Building a startup is quite an experience. In our situation, it was even more strange because we had a team of 4 with a nice chunk of funding before we even knew what to build. So, we spent ~6 months flipping back and forth between ideating and contracting while we figured things out.

Once we got the idea to build a contextual, mobile-focused commerce platform, we moved fast. In a couple years, we grew the team from 4 to a little over twenty and had some solid initial clients. We built a full-fledged commerce API, a couple web apps, JS SDKs, mobile SDKs, white label mobile apps, integrations with several commerce platforms, etc, etc.

We were way ahead of the curve on contextual commerce and remote friendliness. We built a great product and had a lot of fun in the process. It was awesome. 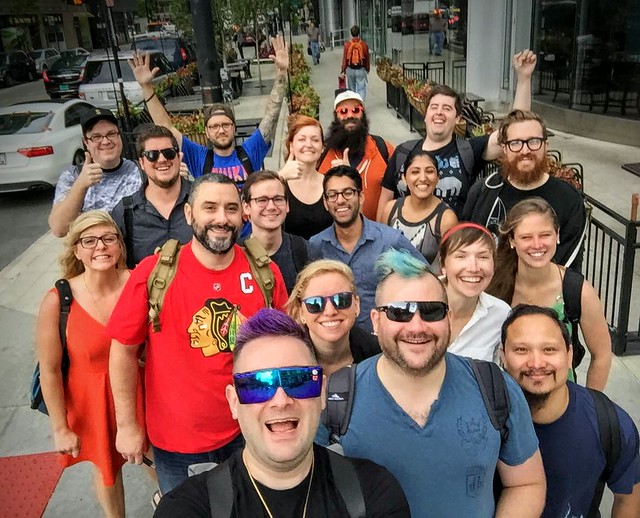 Getting acquired is wild. As we were quickly burning through cash, we had a few companies interested in buying us. A bay-area fintech company, a well-known commerce company, and PayPal. There's a ton of detail that I'm leaving out, but we wound up going with PayPal. They were financially stable, had a chill Chicago office, and it just seemed like a good fit from all sides.

When our acquisition was being finalized, I was actually on vacation, camping in the wilderness with no connectivity. As soon as I came out of the forest, I called my cofounders, and they told me to get to Chicago ASAP.

A few days later, we were walking down Kinzie St to our new office @ The Merchandise Mart.

We were PayPal's first acquisition after their split from ebay. We got paid. We got raises. We had attractive vesting schedules. And PayPal even started paying for my coworking space, haha.

We were part of a real, live exit and it felt amazing.

After joining PayPal, we spent over a year growing our team and trying to rebrand/integrate our commerce platform into a PayPal branded service. Things moved slower than we were used to, and the business had a hard time prioritizing where our product fit into the portfolio.

Eventually, everything that we built got pushed to the side and we were redistributed around PayPal brands. Some of our team went to Braintree, many went to Venmo, and a few of us went to PayPal.

It was kind of a bummer to watch all of that hard work get thrown away, but... it was also something that a handful of us were used to after the Obama campaign.

2017: Next Gen Commerce and the boondoggle

I spent most of 2017 doing Research & Development on PayPal's Next Gen Commerce team with Ivan, Harper and some other folks. It was an interesting year with a few fun hacks and a ridiculous boondoggle.

We somehow convinced PayPal to send us to Southeast Asia to hang with Ivan’s family, meet with startups and learn about money movement in that part of the world. We went with the goal of helping to define PayPal’s SE Asia investment and acquisition strategy and learned a ton. I dunno how fruitful it was for the company, but it sure was a great trip!

Shortly after the boondoggle, Harper decided to leave PayPal to go on a vision quest, but Ivan and I stuck around to finish our vesting. So, we found new opportunities working on Venmo.

I was all over the place at Venmo. I started on the web team and then worked on backend APIs for various commerce initiatives like Venmo Pay, Debit Card, etc.

In 2019, everyone from our startup was coming up on their 4 year vest. Folks started dropping like flies. Nearly everyone left for new opportunities or just to take some time off. 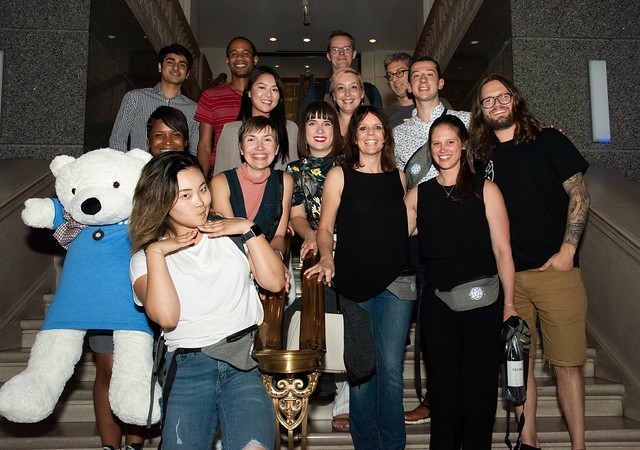 I decided to stick around because I figured that the grass probably wouldn't be much greener anywhere else.

Plus, I was building products that millions of people touched, had a great work/life balance, solid pay, and very little stress.

If I left, I'd probably just get a similar job with some unknown variables... so I stayed and helped build out a team in Chicago. We hired so many awesome/driven folks and built a great, diverse, collaborative, and remote friendly atmosphere. I'm very proud of this.

During this time, I also became a tech lead for Venmo Payouts and Venmo Credit Card, which both shipped with great success.

After we launched the Credit Card, I worked my way on to the product architecture team and loved it. I was turning product ideas into tech designs, working closely with product managers, tech leads and learning a ton from other experienced architecture folks. I felt like I was growing again and spent about 6 months on this team before a re-org dissolved and dispersed the team.

I was bummed. Super bummed.

After product architecture dissolved, I asked to come back to my old team in Chicago, but didn't quite have a landing spot. My old manager (now director!) gladly accepted me and I sorta acted as a pinch hitter, just bouncing around as a lead to help teams get things designed, built and over the finish line. It was fun. I got to work with several new folks and launch some fun products like Crypto Rewards, Gift Wrapped Payments, etc.

I also got to take a month-long sabbatical (a PayPal perk after 5 years of service) to do some camping with Kari and our pup. The sabbatical was really great, but given that it happened during a pandemic, it left me wanting more.

Travel wasn't quite back to normal but the covid variants were starting to become less gnarly. So, despite the PayPal offices still being closed, I started dropping into my coworking space on occasion. The company said this wasn't fair to anyone else and declined to cover the cost. It was a completely fair point, but they also wouldn't entertain the idea of paying for it again once the other offices opened...

As petty as it sounds, something as simple as losing my coworking space as other offices began to open is what kicked off my decision to leave. It cost the company virtually nothing, but sent a strong signal about how little remote employees meant to the corporation. 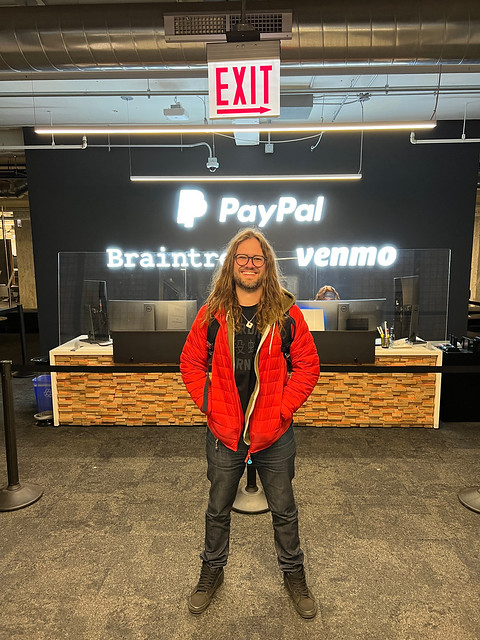 Then, at the start of 2022, I helped lead a new initiative from the tech side. We were working on a product that would require changes to many services across the organization. It was an exciting project, but I’d been here before. When something is this dependent on other teams with other priorities, it's bound to move slow. And with a company this size, it often feels impossible to get the ball rolling.

I’m a builder. I love learning, designing, implementing, and moving fast... but I suddenly found my calendar filled with prioritization and alignment meetings. Not building, not fixing, not thinking and not rocking.

I didn't see a clear path to start doing what I loved again. So, I became less and less interested in the day-to-day. I was rarely excited to go to work, and that was also affecting my mood at home.

I'd been getting solid reviews, compensation, and everything else, but I didn't feel great about my personal contributions anymore. At this point, I'd been with PayPal longer than I've been with any other company. I was very obviously burnt out and not shining. It was clear that it was time to take a break.

But the ultimate clarity came from my password... PayPal requires you to change your primary corporate password every few months. I'd been incrementing 1 letter of my password since we got acquired, and at the time of leaving, I was on the last letter of the alphabet... wtf was I supposed to do?

Firstly, I hate leaving the rest of the Chicago team, as well as the other great folks that I worked with across the org.

Part of me also feels a little dumb for leaving my highest paid and tenured position ever. And I feel a bit gross about not being able to meaningfully contribute to retirement for a while.

There's also something fun about working for a brand with such prestige. If you tell people that you work for Venmo (or PayPal, for the olds), folks legit get excited because they love/use our products. It feels good to be a part of something big like that, and I’m probably gonna miss it.

Relatedly, being able to ship something that tens of millions of people touch, and that the press will report on, is really exciting. That scale and public recognition is something that I've always loved and am definitely going to miss.

PayPal is also a company whose values align closely with mine. They believe in equity and are a big enough force to make change. Every time they launched a campaign to help folks that’d historically been left down and out or going through hard times, I felt incredibly proud to be on the team. It really is a good company and Dan Schulman is one of the best CEOs that I’ve worked under.

Another thing that's messing with me is that I've never just quit a job without having something lined up before. I've been working in some fashion since I was about 13 years old… and I honestly don't know how exactly I’ll handle my time off.

Finally, there's the stress of finding another good place to land when the time's right. 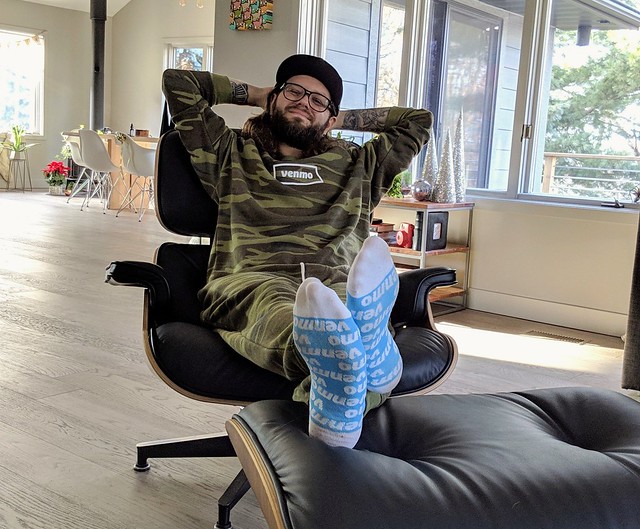 A sabbatical redo. I'm gonna take some months off to recharge and find what excites me again.

I just wanna hack on my own shit for a while. Work on this website, tinker with home automation, carpentry, travel, shoot silly videos, play with cars, visit friends, take photos… who knows.

I’m not ready to retire and will likely get bored soon. So, if you've read this far and are working on something fun, let's talk... After the summer.

In the meantime, if you wanna hang, travel, camp, bike, golf, skate, get lunch, or tinker on silly shit, hit me up! I've literally got nothing going on right now.

Come visit Tennessee
The password story cracked me up - totally relatable as I do the letter change as well!!

You can always take a direct flight to Dallas and we can hit you Austin and see some awesome shows!
I hear great things about your coworking space.
See ya at the pool!
Congrats!!!
That was great Derek. Always very proud of you!!!
Great post Derek! You have had such an amazing and wide-ranging career. After your sabbatical let me know if you want to range a little wider and explore Healthcare technologies.