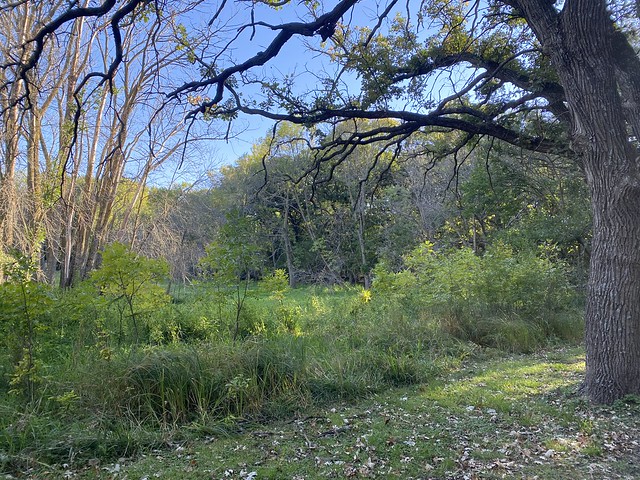 A few weeks ago, Josh, Jeff, and I went camping at Lake Okoboji. We booked a campsite in a completely unreserved loop in the back of a state park and had the entire area to ourselves... which is always a good idea when our group gets together.

But this story is about Saturday night.

The skies were clear and there was a full moon. So naturally, every time one of us caught a glimpse of the moon we’d belt out a big ol wolf howl… and as you can imagine, the other two would follow suit like normal ~40 year olds. It was good that we were in that loop all by ourselves.

So, we were just sitting around the fire, taking turns picking music, bullshitting, havin some beers, solving the world’s problems, howling at the moon, etc. It was great.

At one point we started hearing what sounded like an animal dying way off in the woods. It was just like, some intermittent, but repetitive animal screams/cries. It was so distressed and repetitive that it almost sounded recorded. We couldn’t figure out wtf it was, but “something is definitely dying out there.”

About 10 yards behind our campsite was a giant dried up swamp-like area with tall grasses. At another point I heard something moving in the "swamp," so I made a joke about an alligator sneaking up on us. Every time it happened, I’d say, “You hear that!?” “An alligator is out there!” “It’s getting closer!” etc, etc.

I also had my headlamp on, so I’d whip my head around to check it out every once in a while. Half joking, half trying to catch a glimpse of whatever kind of animal was out there. This went on for a while and the other dudes just giggled, told me I was crazy, said “shut up, dude,” etc.

One time, I heard it moving, turned around to scope it out and swore that I saw something move behind the giant oak tree that was about 10 feet behind me. “There’s something behind that tree!”

The dudes laughed, “nothing’s out there dude!” “It’s probably a squirrel”

“I swear to you. Either that bark moved, or there’s something behind that tree,” I said. I got some more laughter and a dare to go check it out.

So, I slowly snuck around the backside of the tree with my headlamp on and, no shit, there’s an old person in full camo pressed up against the back of the tree.

There was no one else camping anywhere near us and like I said, the only thing behind us was that big ol marsh. This person was the alligator.

So, they realize they got busted, turned to look at me, and my only reaction was to scream the “loudest noise in the universe” in succession. You know when a police blips his siren? The sound I made was kinda like that, but more intense. I guess my instincts wanted the entire campground to know that something sketchy was going on over here… but we were literally the boys that had been crying wolf all night.

My screams and headlamp scared the shit out of this creeper. I thought it was a woman at first, but then realized it was an old man. He just looked into my headlamp like a deer in headlights and I yelled, “I told you someone was out here!”

My buddies thought I was joking, kinda giggled as the old man stepped out and then everyone was like… w.. t.. f.

We were so caught off-guard.

At first, we thought it was awesome that some old man snuck up on us like this. He started bullshitting with us. Telling us how loud we’d been and that he just wanted to mess with us. He then sat down, uninvited, and Jeff threw him a beer.

He pulled out a remote, pressed a button, and we heard that dying animal in the woods again. It was a recording all along. This old man had been messing with us all night.

He told us that he was camping up on a nearby hill… and our howling carried right to his campsite. “We’ve had some loud groups around before, but nothing quite like you guys,” he said.

He’d apparently been there for a couple weeks and looked pretty rough. Dude had definitely seen some drugs in his day.

So, after a while there were a lot of awkward silences in the conversation. This random ass old dude that snuck up on us was just sitting there, completely uninvited.

Looking around, you could see that all of us were wondering wtf was going on. What was this guy going to do if we hadn’t caught him? Why is he still here? Do we need to kick him out? Is he gonna come back? We were internally but collectively making ourselves more paranoid and it was obvious that we were all doing it.

The old man lit up a cigarette. Josh asked for one, took 1 big drag, then another. And then just flicked the half smoked cigarette in the guy’s direction as a sort of flex that we were done being messed with.

Josh starts making comments that are less and less friendly. Jeff mediates. Eventually, I went to go pee, and by the time I got back the man was walkin off toward the hill. Josh told him off.

We then spent the rest of the night a bit paranoid; wondering if we were going to have another encounter with this guy. Josh and Jeff praised my senses. We judged ourselves for taking the situation too lightly at first.

“We’re all gonna die tonight,” Jeff said. “If anyone’s dying, it’s him,” Josh replied. “Dude, he was just messing with us for being annoying,” I tried to convince everyone... myself included.

Eventually, we went to bed with various weapons by our sides. Josh and Jeff were sharing a tent. I was glad to be sleeping in the camper.

Nothing wound up happening and I think my theory was right, but… what a weirdo that man was.

I’m sure we’ll think twice about being so obnoxious the next time we go camping, and maybe be a bit more alert.

He definitely got us good.

Fast forward...that guy is us in our 80's
I really wish I would've gotten a photo of that weirdo.