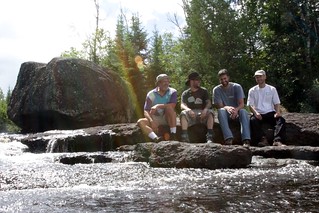 This trip to the boundary waters wound up being the hardest, but also the warmest... actually, it was just straight up, unseasonably hot. We spent a good portion of every day shirtless, in our swimwear, or cooling off in the (very) cool lakes.

Our trip started at the southeast corner of the BWCA Wilderness at Kawishiwi Lake and we traveled 30-40 miles northeast to take out at Round Lake along the Gunflint Trail.

It was the most lakes I'd ever crossed (21) and the most portaging (carrying all of your packs and canoes across land from one lake to the next) I've ever done in a single trip. I was pretty surprised at how out of shape I felt this time around. I mean... I guess that really shouldn't have been much of a surprise... but anyway...

Here's how it broke down.

Permission to enter the BWCA
So, you have to get permits to even enter the BWCA wilderness. Josh had pre-ordered ours but once we arrived to check in, the forest ranger informed us that our permit was for week later... and that there were no permits left for the day we were supposed to depart... Luckily, they had 1 permit left for that day... so we took it.

We "tried our best" to get into the BWCA that day, but couldn't make it happen, so we ordered some pizza, beer, and camped at a public campground just outside the BWCA.

Entering the Wilderness
Sunday, we packed up our campsite and entered the boundary waters to spend most of the morning paddling against "lots" (like, 25 people) of traffic through grassy bogs and burn areas. After about 5 or so portages, we setup camp on a nice island at Lake Polly. Here, we were joined by a group of squirrels with giant nuts (figuratively) who had no problem coming right up to us and were having a great time running around our campsite, trying to get into our GORP.

Leaving the Masses
Monday, we departed Lake Polly and quickly noticed traffic start to die down as we got further from the edge of the BWCA. Everything became much more lush, open, private, and felt more like the BWCA we came to see. There were a couple downpours that slowed us down a bit and eventually caused us to setup camp at a sub-par campsite on Lake Kivaniva... however, we were literally the only people on the lake the entire time we were there, so that felt kinda cool.

From Kivaniva to Little Saganaga
Tuesday, we departed Kivaniva to head further North and eventually find an amazing island campsite on Little Saganaga Lake. It was so rad that we decided to unpack EVERYTHING and layover here for a day. At around dinner time we saw the first other humans that we'd seen in well over 24 hours. One dude that we'd met paddled by to chat and offer us a 21" lake trout that he'd caught. He'd been in the wilderness for 2 months and was planning on another 18 days... The year prior he did 5 months - from May to October. Insanity.

The layover
Wednesday was just a beautiful, relaxing day. We day tripped around Little Saganaga, laid around, explored, swam a couple times, played some cards, etc. Shortly after dinner that night, at around sunset we heard a wolf howling, which in real life, while you're in the wild, is super, super eerie. I was glad to be on an island because it didn't sound too far away.

Later that night we laid on the rocks watching the stars, satellites and all sorts of shooting stars. The stars up north really are amazing.

The Hunt
Thursday, we woke up to a hot-sticky morning, packed up camp and headed to Tuscarora Lake where we'd find another awesome island campsite.

Right when we were getting unpacked to start lunch we saw a bald eagle swoop in and snatch a great blue heron straight out of mid air. The 2 wrestled around as they fell into the lake, which the eagle didn't like, so he quickly bounced up to a nearby treetop to dry off. The heron also tried to fly away to take cover but was too injured to get airborne... so he just floated over to the nearest shore to hang out and periodically moan in pain while the eagle watched from the treetops. Eventually, the eagle swooped down to the shore next to the blue heron, which of course scared the shit out of it and caused it to jump back into the water... but the eagle just sat there taunting the heron. After a short while, the eagle screeched and darted toward the blue heron, which, gave its last bit of energy to jump out of the water and spread its wings in an attempt to intimidate the Eagle. It didn't work. The Eagle straight ended the Heron and brought it up to shore to enjoy for lunch... along with some friends.

I've never seen a wild animal hunt another like that. It was insane.

So after all that excitement, we spent the rest of the day exploring the incredible island we were camping on and enjoying our last full day in the wilderness. That evening, we watched a classic sunset turn into a super intimidating storm that appeared to be heading straight toward our campsite. We prepared everything the best we could, hoping to not get hailed on, went to sleep, and wound up not getting a drop of rain. Whew.

It's interesting how much you pay attention to and respect the weather when you have no option of going indoors to escape it.

The Tuscarora Portage
Friday, we woke up, figured out how to make pancakes (the skillet needs to be hot, btw), and packed up camp for the last time to head toward the Gunflint Trail. Along the way we only had 2 portages, but one of which was 1.5 miles and the other was a half mile... with 5 ~70lb packs and 2 canoes. It was pretty brutal, but the relay system we'd planned out worked really well. As soon as we got to our take out point, we quickly got back into our swimwear and rinsed that morning's sweat off in the lakes one last time before heading into town to grab pizza, soda, and beer.

Later that afternoon we went to Josh's sister's place to take our first showers in a week and then head back out for burgers and beer at Hungry Jack Lodge.

It was a challenging, but super rewarding trip. I'm incredibly glad I was able to get it out of the way before the insane week to follow.

Check out the rest of my pics!