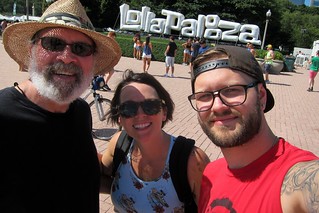 This was one of the weaker lineups I've seen at Lollapalooza, but out of tradition, we of course still went. On top of a few great shows, we got to hang out with good family and friends, eat some good food, enjoy a few cocktails, and shop on Milwaukee Ave. Here's who we saw...

Kari's dad joined us so that he could see Paul McCartney, which was awesome.

Afterwards: a bit of clubbing