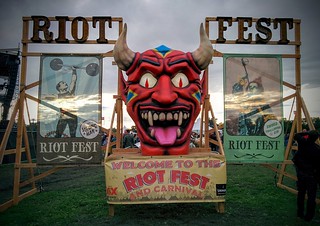 Kari pretty much ordered us a set of Riot Fest tickets as soon as she saw this year's line-up. There wasn't many current acts, but it was chock full of bands we would've gone to 10+ years ago if we had money... or knew that we liked going to shows. I'd barely seen any of these people play before, but was definitely into a ton of them at least one point in my life.

After watching Lollapalooza get a bigger and bigger, molly fueled, EDM crowd over the last 10 years, the crowd at Riot Fest was a much welcomed change. Almost everyone there knew how to go to a show and navigate crowds without being a huge dick. Everyone was still partying, dancing, and having a good time, but the vibe, older crowd and smaller fest was just super awesome.

Add all that in with carnival rides, fair food, and beer? It turned out to be a super positive experience.

Started with an awesome brunch with Clint, Jacqui, Harper, Hiromi, and friends at Handlebar. 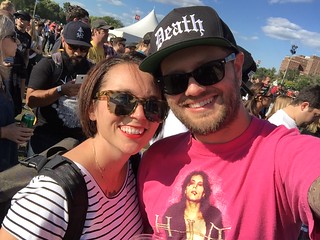 Started with another awesome brunch at Bangers and Lace

So! That was Riot Fest... Here are the rest of my photos! Also, I need to get a new concert camera ASAP.