The Road Rally posted 5 years ago 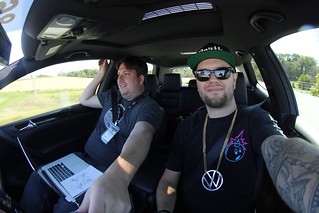 Almost every time I talk about participating in the Mid Coast Road Rally event that I do in Iowa, I get asked what exactly it is. I'm sure there are different variations, but the one that Road Rally Charities puts together every year in Iowa goes like this...

The event is full of cars ranging from Ford Escorts to Ferraris and on to giant SUVs.

Each car has a driver and at least one passenger that acts as a navigator. We all meet at the designated kickoff point... which is the only destination you know about for the entire day. You just assume that you'll be driving ~300 miles and have 3-5 different check points... but you have no idea where those check points are or how or when you'll be getting to them.

So, just as you're pulling out of the first checkpoint, a timer starts and you get handed a paper with step-by-step instructions to the next checkpoint. Those instructions list a bunch of street names, a direction to turn on each street and the average speed you're supposed to maintain on that street. There's no distance though... you could be on a street 2 blocks or 20 miles before getting to your next turn. And even if there was a distance, there are so many other variables like stop lights, traffic, tractors, speed limit changes, etc that make hitting those averages super, super hard. You'll be on super windy roads in town, in the country, on interstates, in villages, through parks, or even turning off and on the same road several times.

The idea is to shoot for "par" on each of the legs by following the avg speeds and getting to the next checkpoint in the right amount of time (derived from driving the average speeds on each of the streets). Whoever has the least variance from the target times at the end of the day, wins.

Trying to figure out the directions and maintain the intended speeds is a super fun challenge. You get to cruise around some really fun roads, see some neat places, and become reminded that Iowa has some beautiful scenery in areas we don't visit every day.

Plus, you will absolutely miss turns, get lost, run into farmers' markets or charity walks, and have a hilarious time speeding across the state, trying to figure out how to correct your time.

It's just a blast.

So this was my second time driving in and third time participating in the Mid Coast Road Rally. We tried to take a more technical approach this time with 2 different GPS systems going along with a laptop for doing calculations and spot checking via Google Maps. But even with 3 phones, built-in car navigation, our own timers, and laptops... we didn't even place within the top 10 out of a hundred and something cars. I think first place had something like a 6 minute total variance at the end of the day with 10th place having like 9 minutes... Either way, it was a super fun day and we got to see some awesome rides.

Check out my pics!